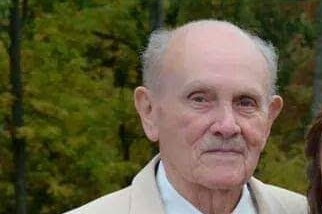 Donald McCamish, 90, of Evansville, passed away Friday, January 21, 2022, at his home surrounded by family.
Donald was born January 13, 1932, in Evansville, IN to the late Claude and Audrey (LaMar) McCamish. He was a graduate of Central High School and a former member of Grace Baptist Church. Don owned and operated McCamish Garage for over 75 years. He also served his country for two years with the US Army. He was a proud Mason, a member of the Lessing Lodge #464 since 1967. When Don wasn’t fixing everyone’s cars, you could find him boating at KenLake Marina with his friends and loved ones.
Surviving Don are his sister, Dorothy Hyatt; a daughter, Denise (Mike) McGuyer; a son, David (Kelly) McCamish; a son, Dan (Susan) McCamish; grandchildren, Tyler (Melyssa) McCamish, Stephanie (Lee) Schoolfield, Mallorie McCamish, Kaleb (Jennalyn) McCamish, Luke (Tiffany) McCamish, Dale McCamish, Audrey McCamish; ten loving great grandchildren; and his dog and faithful companion, Molly.
In addition to his parents, Don was preceded in death by his late wife, Anova McCamish, and his brother, Gene McCamish.
Services will be held at Sunset Funeral Home. Visitation will be on Monday, January 24th from 3:00pm to 7:00pm, as well as Tuesday, January 25th from 10:00am to 11:00am, with the service following.
In lieu of flowers, the family requests donations for the Vanderburgh County Humane Society.