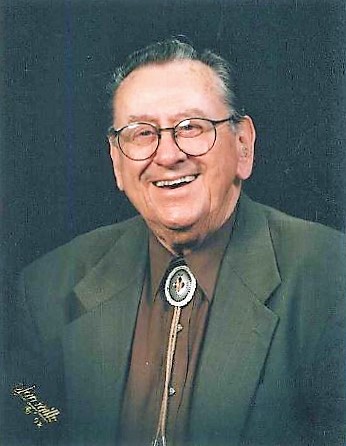 Bill served his country in the United States Air Force as an Airman First Class during World War II. He went on to become a livestock insurance manager for Hartford Insurance for over 30 years. Bill developed a collection of bolo ties that he liked to wear on his insurance calls. Bill was a drummer and formed the Billy Howard Orchestra. He loved big band music. Bill was a man of God and a member of Northeast Park Baptist Church. Bill was a member of the FOE Eagles and North Side Business Mens Association. He was a Post Commander of American Legion and member of Post 41 in Salem, IN. One of his fondest memories with his wife was spending his later years working together to go to the grocery stores; he in his electric wheelchair and his wife holding on to the grocery cart. His proudest moment in life was the birth of his two sons.

Bill was preceded in death by his parents and his brother Duane Pickelheimer.

Visitation will be from 10 a.m. until time of service at 1 p.m. Thursday, October 24th at Sunset Funeral Home with a burial to directly follow at Sunset Memorial Park. In lieu of flowers please make donations to the Wounded Warrior Foundation.