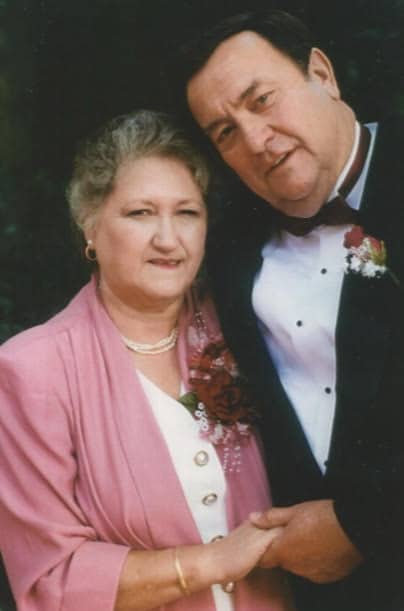 Shirley G. Stephenson, 85, was reunited with her husband on December 21, 2021. She was born in Owensboro, Kentucky, on June 16, 1936, to William and Thelma Goff. Shirley had two brothers, Edward and Kenneth.

It all started in 1952, when Shirley went to the movie theatre with a friend. After grabbing their snacks to head into the show, she spotted a very handsome usher standing off to the side, and very casually pointed to him and told her friend “He’s mine.”

On the first day of Spring, March 20, 1954, Bill and Shirley were married. Soon after, they started to grow their family. While still living in Indiana, they had their sons Bill Ray and Brian. They then moved their family to California where they had their three girls, Renee, Jayne, and Susan. As their family grew, so did their home. Shirley engineered the design of the home and Bill executed the build with his own hands. She was definitely the brains of the operation, while he was the brawn.

In addition to maintaining a growing home, Bill’s career kept him busy.

He worked for Kasler Corporation. He was the foreman for the paving crew. He helped to pave the way for many who travel the states. They paved interstates and freeways, but also runways at airports in cities like Dallas, Ft. Worth, Salt Lake City, and Denver.

While Bill was in construction, Shirley chose to work at department stores. This way she could be truly dedicated to Bill’s work and the potential to be called out of state at any time. At one point, she was offered a management position. Her response to this offer was that she was already the manager of the Stephenson household. And boy was that household booming!

Every other year, Bill and Shirley would pack up all five kids and drive straight through to Evansville to visit their family. They would also take trips to the mountains and go camping with family and friends. Most of their adventures were to anywhere the family was gathered whether it was at the beach for a bon fire or simply to the back yard for a BBQ. Bill and Shirley also were card players.  They arranged games of Rummy Dummy, Clabber and were both very much involved, but really masterminded by Shirley.

Although Bill and Shirley were a team in most aspects of life, they still had their own individual interests. Bill enjoyed making rope bridges and pully swings, fishing, gardening, snipe hunting, and all different types of auto racing. He also found joy in pulling pranks on other people. There was a time or two that he was the culprit of hiding the grandkids’ shoes or locking them out of the car when he came to pick them up.

Shirley, on the other hand, stayed busy with the interests of the house. Although she enjoyed reading romance and mystery novels, watching reality shows, doing crafts, and working her crossword puzzles, Shirley was always cooking something up in the kitchen for the family. A couple of her signature dishes were her chicken and dumplings and her homemade pineapple upside down cake. When the grandkids were around and wanting to help cook, they were amazed at how she knew what went into what she was making without using a recipe; and when they would ask how she knew how much salt or flour to include, her sweet response would be “about that much.”

After 62 years of marriage, Bill and Shirley’s greatest accomplishment in life together, was their love for one another. It was obvious they were evenly yoked. Both were leaders of the family and did so with a solid foundation of family values. They were a team, the true definition of love, husband and wife, and best friends. To their family and friends, they leave a forever lasting legacy to love each other unconditionally, be caring and compassionate to those around you, and always bring joy and life into whatever you do.

The family would like to extend a special thanks to Randi at Zeidler’s Flowers for assisting with such beautiful floral arrangements for the service.

Sunset Funeral Home and Memorial Park will be holding a Celebration of Life service for Bill and Shirley on Friday, June 10, 2022. Visiting time will be from 12:00pm until the service begins at 1:00pm. There will be ZOOM livestreaming available for those that are attending remotely. Please call Sunset Funeral Home for log in information.