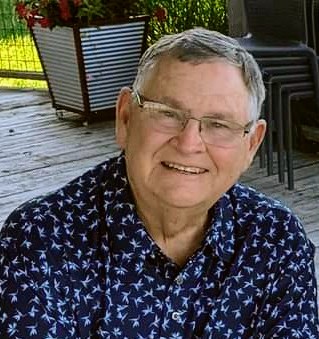 Dick graduated from Lafayette Jeff High School in 1967. While in high school, he was a paper boy for Lafayette Journal & Courier. During his senior year, Dick won a trip to the 1967 Rose Bowl game where Purdue University played the University of Southern California by selling the most newspaper subscriptions. He attended Purdue University and started his railroad career during college by working part-time for the local railroad. He graduated with a bachelor’s degree in Industrial Management in 1971. Dick was a member of the Navy ROTC program at Purdue. Upon graduation, he was commissioned to a three-year post in Naples, Italy as a communications officer and left the naval service as a Lieutenant.

After his Navy service, Dick continued his railroad career as a manager for 40 years while working for railroads in Vermont (Central Vermont), Michigan (Grand Trunk), Minnesota (DWP) and Indiana (Indiana Southern and Hoosier Southern respectively) with a nine-month tour in Brazil, South America. During his career, Dick was a member of multiple railroad organizations and served on numerous boards to include the Association of American Railroad Superintendents, American Short Line and Regional Railroad Association, and Indiana Railroad Transportation Group. Dick enjoyed his career in the railroad industry and retired in 2010. In retirement, he was a member and served a two-year term as Chair for Evansville SCORE (Service Corps of Retired Executives) an organization that helps to serve and mentor young entrepreneurs. He also volunteered for Honor Flight of Southern Indiana which provides our nation’s veterans with a free trip to visit memorials in Washington, DC.

Dick met his wife Theresa (Terri) Dierckman, of 47 years, on a blind date while at Purdue. His idea of dating was to go out on Saturday night after the train came through town. Dick married Terri in 1974 in Lafayette, Indiana. In 1983, they had their twin sons, David and Daniel. Dick loved his family very much and was an amazing husband, father, grandfather. He was a loyal friend, and enjoyed helping others and spending time with the people he loved. Dick loved traveling with his family. In retirement, he and Terri traveled to their condo in Glen Arbor, Michigan, and went on multiple cruises, trips to Florida and the western United States, and overseas to Spain and Portugal. They also visited numerous U.S. National Parks. Dick enjoyed watching and attending Purdue athletic events, even though losing brought him frustration many times. At home, he enjoyed putting puzzles together, cooking, reading, and feeding the birds in the backyard. Most importantly, he loved spending time with his four grandchildren and watching them grow.

Dick was preceded in death by his parents Kenneth and Ruth; father-in-law and mother-in-law, Bernard and Lorraine Dierckman; many loving extended family members and close friends; and his loyal dog Buddy.

Visitation will be from 11:00am CST until the time of service at Noon with a lunch and additional visitation on Saturday, March 12th, 2022, at Evansville Sunset Funeral Home. The service will be live streamed for those not able to attend, call the funeral home for details.

In lieu of flowers, Dick requested donations be made to the following organizations in his memory; MDS Foundation, Honor Flight of Southern Indiana, and Evansville Salvation Army.