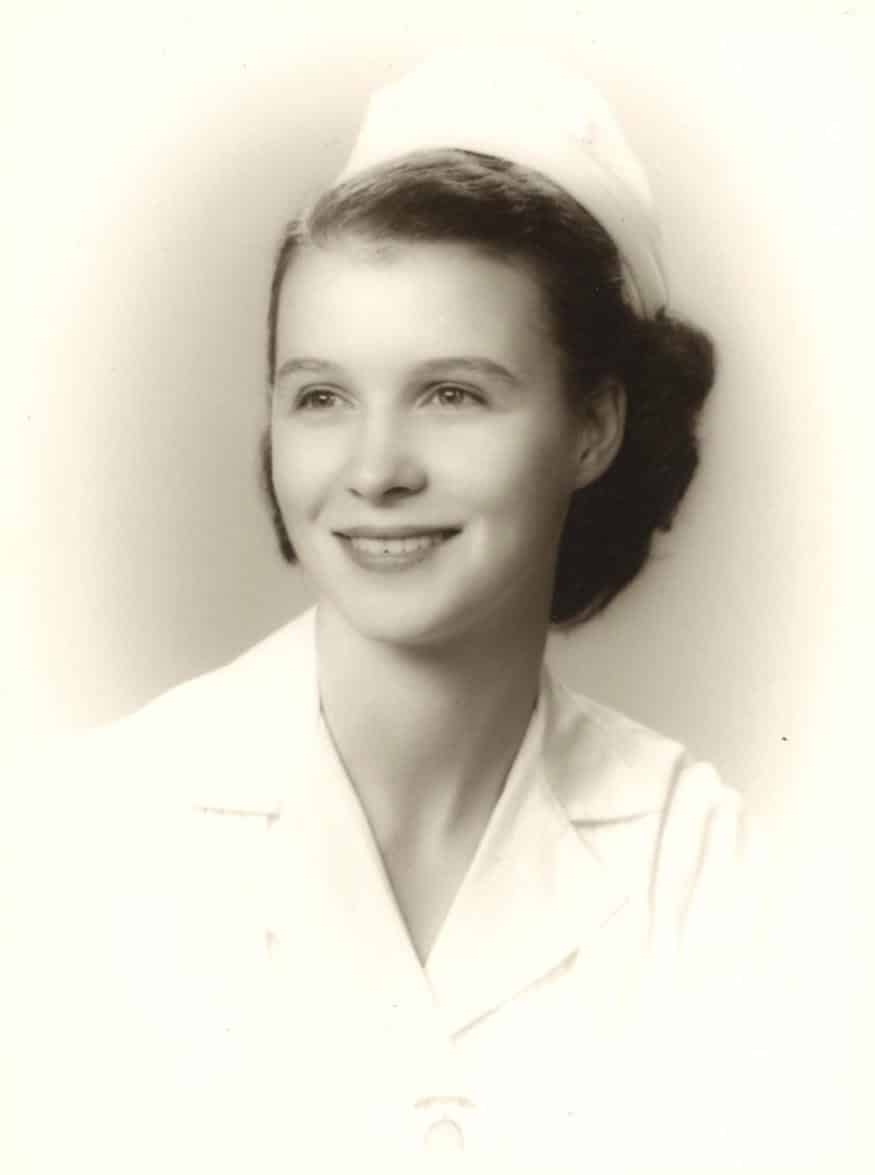 Joyce was an accomplished nurse, dedicated educator, a loving mother, grandmother and a devoted wife.  After completing high school in Wadsworth, OH, Joyce went to live with her extended family in Columbia, KY to attend Lindsey Wilson Junior College, (LWJC).  Not only did Joyce excel in academics but she was also a cheerleader and was elected Homecoming Queen of LWJC. It was there that she met the love of her life, Kendrick Webb Dungan who was returning from the war. They were married in 1951 in Cincinnati, OH where they had their first home. Joyce graduated from Cincinnati’s Jewish Hospital School of Nursing in 1952. She then became an Assistant Instructor there and continued until 1954 when Joyce and Webb moved to Evansville, IN.  Joyce continued her nursing and academic pursuits receiving her Bachelor of Science in Nursing in 1955 and her Masters of Science in Nursing in 1975 from The University of Evansville, (UofE).  She completed her Doctor of Education from Indiana University in 1984.

Joyce was a tireless worker in all aspects of her life.  She worked as a nursing instructor at St. Mary’s Hospital School of Nursing in Evansville from 1956 to 1962 and taught a teacher refresher course for them again in 1968.  She also worked with School Occupational Health for the Evansville-Vanderburgh School Corporation in 1972.  At the same time she had begun what would be her long career of teaching at the UofE School of Nursing.  She started there as an instructional assistant in 1954, became an assistant professor in 1972, and an associate professor in 1980.  Joyce served as the director of the learning resource laboratory at UofE’s Harlaxton Campus in Grantham, England from 1983 to 1986.  She returned from England to become a Professor of Nursing from 1986 to 1988.   From 1988 to 1993 Joyce served as an associate professor and interim dean of the new school of nursing at the University of Hawaii at Manoa in Honolulu.  Upon returning to Evansville from Hawaii in 1994, Joyce returned to UofE as a visiting professor and in 1996, she also became a visiting professor at the Echo Health Center in Evansville.

In the 1980’s Joyce developed The Dungan Model of Dynamic Integration, (DMDI), which views humans as having three interconnected dimensions of body, mind, and spirit. DMDI is a broad conceptual model that provides a framework for nursing care based on the patient’s whole self.  She also co-authored other publications on the application of DMDI to various different nursing disciplines.  Both during her career and after formal retirement from regular teaching duties she traveled extensively presenting the DMDI model and even consulting on its implementation to schools, hospitals, and even the US Navy.

Joyce’s faith in Jesus Christ has always been an important motivator in her life.  She and Webb were active in church ministry.  Joyce served as a volunteer in the Boy’s Club Service League of Evansville.  She was an active member of the Mobile Health Unit and volunteered at the Heartbeat Health Festival, 1986. Joyce also served on the Board of directors at the Kunkini-at-Home, Youth Outreach, for the Waikiki Health Center.  Joyce spent much of her semi-retirement years studying and teaching with Bible Study Fellowship, International.  She also served as a Bible teacher and mentor for women undergoing the programs at Grace Recovery Home.  She and Webb would often have a small group of women at their home for a meal as a graduation or holiday celebration.

Joyce was an enthusiastic supporter of all of the pursuits of her three children.  She cheered loudly at every football, basketball and soccer game the boys’ played.  She helped to make and repair horse and rider clothing for her daughter and travelled many miles to attend equestrian competitions.  Joyce and Webb enjoyed doing things together.  They and their youngest son, Jeff, were able to sight see throughout Europe while Joyce taught at Harlaxton.  She and Webb then explored the Hawaiian Islands during her time teaching there.

Joyce and Webb very much adored their 11 grandchildren and made every effort to be active participants in each of their pursuits including staying in touch and asking about each of them on a weekly basis when they could no longer be physically present. Joyce and Webb were also avid bridge players and they developed a wonderful group of lifelong friends who enjoyed time together every month sitting across tables from each other playing this game after enjoying a meal.  It was rare over all the years that they would miss their bridge games.  This friend group became so close that they vacationed together and brought their families together for the holidays. This wonderful woman, who always had an unlimited view of what was possible, will continue to be loved by them all.

Joyce was preceded in death by her husband, Kendrick Webb Dungan, her parents and her siblings, Ralph Garner and Lucille Bigler

Services to honor the life and memory of Joyce will be held at Sunset Funeral Home on Saturday, October 1st, 2022. Visitation will start at 2:00pm with the service to immediately follow at 4:00pm.

As Joyce and Webb’s children and grandchildren all reside out of town, they would request that instead of flowers, you take a moment to write down fond memories you have of Joyce and/or Webb and provide copies of any photos that you may have that you think may be of interest to the family.  You could either:

Bring these to the funeral home,

Send them in email to:

or mail them to: