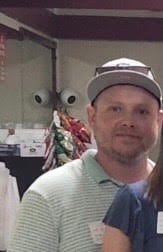 He was preceded in death by his mother Cynthia Chaffin, grandpa Chuck Chaffin, and grandmother Shirley Brown.

He is survived by his father Neil Bailey; sister Ashley Bailey (Richard Robb) and children Brennon Robb, Keylan Robb, and Reice Fuller; grandmother Sandy Morris; and numerous cousins, aunts, uncles, and extended family. He leaves behind many family and friends to mourn his passing.

Jared was born in Evansville, Indiana on October 15, 1982 where he spent most of his life. He lived in Florida for some time where he left a lasting impression and most recently, he was living in Bloomington, Indiana. He worked at Berry Plastics.

While it is not what defines him, it is no secret to most that he struggled with addiction most of his adult life. He fought daily to overcome this battle and for the last year of his life, he was winning. He took this time to mend relationships and make memories that brought joy back into his life. All of his life he was a Miami Dolphins and St. Louis Cardinals fan; he loved Cardinals baseball! Jared enjoyed spending downtime drawing or listening to a wide range of music, from Kane Brown to Nirvana to Eminem and Tu-Pac. Through all of his obstacles, the attributes he never lost and will be remembered for the most would be his kind spirit, love for his grandma, and passion for sports and music.

Visitation for Jared will be held at Sunset Funeral Home and Memorial Park on Friday, September 16, 2022 at 2pm with a memorial service following at 4pm.