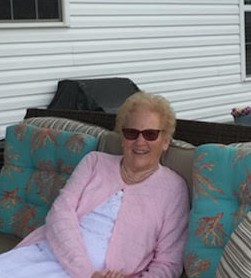 Janet was the most amazing mother, grandmother, great-grandmother, sister, and friend. She was the first of ten siblings growing up on a farm in Owensboro, she helped in raising them and cared deeply for their special bond. She was very proud of her German Heritage. She was a hard worker and put her heart and soul into everything she did. Janet was most proud to be a homemaker and raise her children; they created so many memories. Janet never hesitated in getting involved in numerous activities; she greatly enjoyed playing rummy, bridge, crossword puzzles, and reading. She loved collecting items; her favorite of her collection was nut crackers. Janet had a green thumb and loved her garden, especially the beautiful flowers she grew. Janet was always dolled up, her nails and hair always looked beautiful. You could often read exactly what Janet was thinking just by looking at her, she had the most spunky personality. Janet had so much love for her children and grandchildren, cherishing all memories made together.

Visitation will be from 1pm until the time of service at 3pm on Saturday, October 15, 2022 at Sunset Funeral Home.