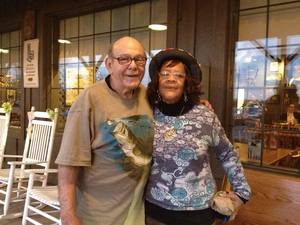 Service Details: No details are available.

Fredrich Lorenz, age 81, passed away along with his wife Elizabeth Carter-Lorenz, age 71, on March 1, 2018 in a house fire. They both were born in Chicago, Il and married for 31 years.

Fred retired after 35 years of service from CTA (Chicago Transit Authority), then worked as an EMT for Berz Ambulance, Pace Bus Company transporting the disabled and elderly and Bluebird Tour Bus Company. He also drove the church bus for Living Waters Church in Bolingbrook, Il and later at Oakhill Christian Center in Evansville, In.. Fred decided retirement wasn’t for him after relocating to Chrisney, In so he went to work for Walmart in Booneville, In. thinking he would be a Greeter. Much to his surprise, he was hired for maintenance and has worked there from 2011 untill his passing.

Elizabeth worked for AMA ( American Medical Association) for several years. She enlisted in the Navy Reserves and served for 6 years, then worked as a supervisor for UPS. She enjoyed being retired.

They both enjoyed the outdoors, bowling, traveling as they could, family get togethers and reaching out to college students at USI to refer them to an on campus ministry. Fred enjoyed fishing and Elizabeth enjoyed gardening. They loved to meet new people, share Jesus with them, pray with them and bless them.

Fred is preceded in death by his parents and 1 brother.

Elizabeth is preceded in death by her parents, 4 brothers and 3 sisters.

In lieu of flowers, monetary donations are greatly appreciated due to the unexpected circumstances of this tragedy.

No Photos and Videos
Previous Elizabeth Lorenz
Next Jeanette Tucker