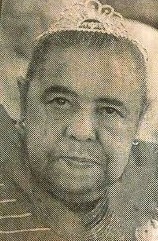 Elsie remained in Hopkinsville where she enjoyed being a part of the membership of Durrett Avenue Baptist Church. Elsie had a natural talent for playing the piano by ear and was the pianist for their Sunday School. She developed many close friendships there.

After becoming ill, she lived at Medco/Henderson Nursing and Rehabilitation, Henderson, Kentucky which she lovingly called home for over a decade. She loved the patients and staff and they and their families came to love her dearly. Elsie participated in all events at the home and loved going on outings with the nursing home. Some of her favorite activities were the weekly visiting church services, Bingo which she won a lot, and the annual Thanksgiving dinner with family. Henderson Nursing and Rehabilitation will honor Elsie by dedicating their first hospice room “The Elsie Robinson Hospice Room” with a plaque of her on the door.

Elsie was preceded in death by her parents and 9 siblings. One especially attentive brother Payton F. (Gladys Ruthene) Robinson, sisters-in-law, brothers-in-law, and nieces and nephews.

Visitation will be from 9 in the morning until service time at 11 a.m. Saturday, January 12th at Sunset Funeral Home.