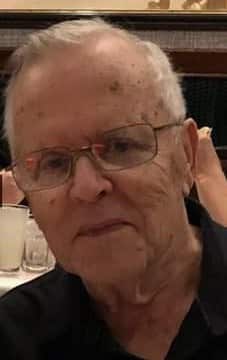 Donald was a graduate of Central High School, class of 1955. After high school, his first job was as a teller at Citizens Bank, where he was employee of the month and more importantly met his future wife, Harriett.  He then went to work for Bootz Manufacturing where he worked for over 40 years.  For Bootz, he was Inventory Manager and could count a warehouse at a glance.  He was also social planner, mailman, and jack of all trades at Bootz.  In 1958, Donald married the love of his life, Harriett, and together they had three children.  He loved being a father, often taking his 3 kids out to eat by himself while Harriett was at work.  He loved watching all sports and loved going to the horse races.  He could talk stats for the Evansville Triplets, St Louis Cardinals or Central High School teams with anyone.  Each week he turned in numerous ‘Beat the Expert’ college football picks to the Courier.  One week, he was “Mr. Perfect” for Beat the Experts, getting all games and the score right.  He was a member of The Elks, where he planned numerous golf outings and social events.

Donald was a lifelong member of First Avenue Presbyterian Church.  He was on the church basketball team as a kid, was a Deacon and an Elder.  Many fellowship dinners were enjoyed with all of his friends from church and Harriett.  Don loved to travel and drove his family across the country to California each August for years to visit his brothers.  He loved spending time with his kids and grandsons.

Donald is preceded in death by his wife of 64 years Harriett Jerger Causey.  And his parents, Roy and Ottie Causey; his four brothers: Charles, Robert, Jack and Lowell.

Services for Donald will be held at First Avenue Presbyterian Church in Evansville, IN, on Friday 9/2/2022.  Visitation will begin at 10:30 am with the funeral starting at 12pm. An entombment will follow, taking place at Sunset Memorial Park. Any memorial gifts can be given to the Alzheimer’s Association in memory of Donald. Livestreaming through Zoom will be available for those attending remotely. Please call Sunset for login details.

No Photos and Videos
Previous Ben Todd
Next Leslie A. Greenwalt