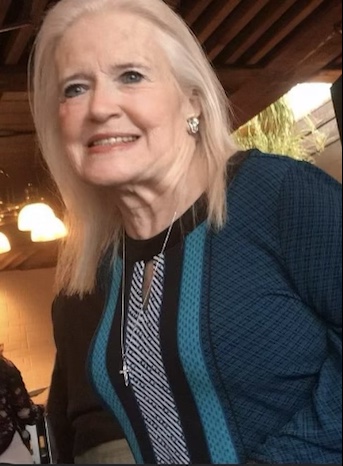 Brenda Thomas King, age 79 passed away on July 25, 2021. Brenda was born to Ralph and Lucille (Jones) Thomas on September 9, 1942, in Flemingsburg, Kentucky.
Brenda was a loving wife and mother. Brenda attended Murray State University and was very active in drama and the school’s television broadcasts of The Thoroughbred Hour. In the late 70’s, Brenda and husband Emory helped found The Agape House in Hazleton, Indiana, where they cared for as many as nineteen foster children at any given time, during a seven-year ministry. Brenda made a positive impact on numerous lives by demonstrating loving care and the message of Christ.
She loved her family deeply and had one of the most outgoing personalities imaginable. Over the last three years, she was a resident of Red Bud Hills (Bloomington) where she made many friends. When she wasn’t mingling with her fellow residents, she could be found taking in religious or political television and reading books or her Bible.
She is preceded in death by her husband Emory King, her parents, son Bradley King, brother Phil Thomas, and granddaughter Kimberly Kiesel . She is survived by her daughter Lisa (Kevin) Huntley, son Caleb (Kelli) King, daughter in law Vicki King, and Tena (Frank) Fehrenbacher. In addition, she is survived by her grandchildren Elizabeth Danielle Scott, Matthew (Kasie) King, Zacharia King, Sarah (Dylan) Welden, Lindy King, and six great grandchildren.
Visitation will be held on Saturday, July 31, 2021, from 10:00 am – 12:00 pm in the Chapel at Sunset Funeral Home with a graveside service, officiated by Pastor Emeritus Glynn Pfohl to begin at 12:00 pm.