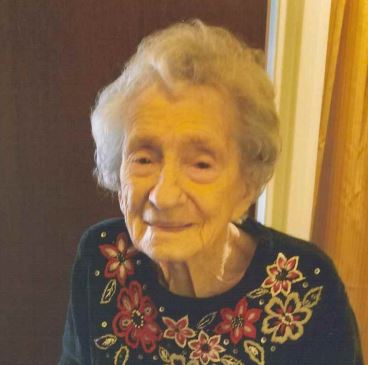 Annabelle Greenfield, 102, of Evansville, Indiana, passed away peacefully on Friday, September 18, 2020. She was born on September 27, 1917 in Dubois County, Indiana to Frank and Nellie Reed. She married the love of her live, James W. (“Bill”) Greenfield, in 1946 and they had four children, Bill, Donnella, Tim, and Mark. She was a member of and very active in the Scott Township General Baptist Church from 1951 until it closed. Annabelle enjoyed spending time with her family, particularly her grandkids and great-grandkids. She loved anything having to do with music—played the organ and guitar, and Annabelle was always the first to request a song on the radio or a piece played on the piano (often by her daughter Donnella). Never one to sit around, she was very active in an aerobics group from age 65-95. Even when they stopped doing aerobics they continued to meet for lunches. When chatting with Annabelle, you could always count on a story about her occasional motorcycle rides on the back of a Harley.

Along with her husband, Annabelle was preceded in death by her brothers Vernon and Robert and a sister Donna and Donna’s daughter Laura. She also lost her son Timothy V. Greenfield, following a long battle with cancer, on March 21, 2020.

Arrangements are being handled by Sunset. There will be no services at this time, but the family asks that everyone do a little “Boot Scootin’ Boogie” in Annabelle’s honor.